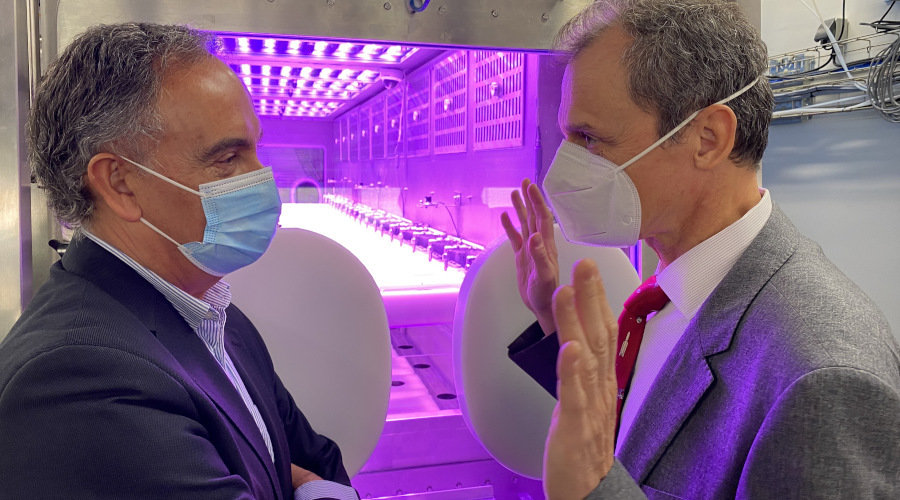 An experimental facility from ESA and UAB for the development of technologies enabling long term manned mission in Space.

The Astronaut Pedro Duque has visited today the MELiSSA Pilot Plant in the Engineering School of UAB together with representatives of ESA, UAB and the MELiSSA Consortium. The laboratory is part of the European Space Agency (ESA) MELiSSA project and aims to be the unique facility in Europe for demonstration of Closed Loop Life Support Systems, paving the way to human autonomy during long durations space missions. MELiSSA is a regenerative circular system for food, water and oxygen recovery from wastes, carbon dioxide and minerals. In October 2021, the MELiSSA Pilot Plant has completed an experiment of 18 month duration involving the continuous operation of 3 of its 6 compartments, with an excellent and robust performance, what represents a remarkable proof of concept of the approach followed in its development. The experiment consisted on the connection of the nitrification unit (preparing de nitrogen source), the micro-algae compartment (producing the food precursor biomass, fixing CO2 and producing oxygen) and the rats isolator mimicking the respiration of astronauts (consuming oxygen and producing CO2). It enabled to test the capacity of the MELiSSA loop in terms of food complement production, water recycling and oxygen generation, working under a dedicated control system, in a continuous dynamic, long term experiment, representative of missions in Space. Additionally, the compartment growing plants is also ready to start the connection to the MELiSSA loop.

MELiSSA is the acronym for Micro-Ecological Life Support System Alternative, an innovative Project of the European Space Agency that was initiated as part of a research programme on life support Technologies, in order to facilitate long duration manned space missions such as Mars Transit Habitat.

These types of missions can not be performed without regenerative life support systems like MELiSSA that will drastically reduce the amount of logistics needed to support the crew. For this, a regenerative circular system is proposed, with the generation of edible material from higher plants and microalgae, revitalization of atmosphere for respiration, recovery of water, and recycling of the wastes generated by the crew and plant growth.

The MELISSA project is targeting ideally 100% of recycling of all chemical elements, i.e. a fully self-sustainable ecosystem without any resupply. In terms of processes, control, stability, safety, robustness, this target represents a very high challenge.

The recycling challenges of MELISSA are re-enforced by the closed environment conditions and the presence of humans. As a consequence, intensive characterization, safety analysis comprehensive integration, verification, validation and qualification activities are mandatory steps in the development and validation of MELiSSA.

In 2009, the second generation laboratory for the MELiSSA Pilot Plant at UAB started its activities, providing a world class research and development facility. In the last years several achievements have been made in the progressive construction of the different blocks comprising the MELiSSA Pilot plant. To be highlighted, the operation of three compartments of the MELiSSA Pilot Plant during a long term period of 18 months under continuous and controlled operation was successfully achieved by October 2021, demonstrating the scientific and technological capacities of the Consortium. These three compartments were the nitrification bioreactor, the microalgae photobioreactor and the animal isolator as a crew mock-up.

In parallel, solid progresses have been achieved as well for space demonstration on board the International Space Station such as the photobiorecator ARTEMISS (demonstrating the growth of micro-algae in Space) and the new experiment BIORAT 1 and 2 (demonstrating the operation in continuous mode of nitrification and micro-algae photobioreactor) and PFPU (modular food production complement unit, for plant growth), in preparation. Like this the demonstration of continuous process obtained in the MELiSSA Pilot Plant in terrestrial conditions will be further explored in Space conditions.

The MELiSSA project is an international and multidisciplinary collaboration with a core team of fourteen partners, including ESA, i.e. SCK/CEN (Mol, B), VITO (Mol, B), University of Ghent (Ghent, B), University of Mons (Mons, B), Universitat Autonoma de Barcelona (Barcelona, E), University of Guelph (Guelph, CND), University Clermont Auvergne (Clermont-Ferrand, F), SHERPA Engineering (Paris, F), Enginsoft (Bergamo, IT), University of Napoli Federico II (Napoli, IT), Univeristy of Lausanne (Lausanne, CH), IPStar (Vught, NL), the MELiSSA Foundation (Brussels, Belgium). The coordination of the Consortium is done by ESA, at the request of the rest of the partners. As the project develops, more and more European companies and organizations are contributing to the joint venture, bringing complementary expertise where needed (today more than 50 organizations from 12 countries have contributed to MELiSSA). The scientists and engineers in MELiSSA are from various horizons (academic organizations, industries) and gather a comprehensive multidisciplinary expertise (microbiology, modelling, process engineering, biotechnology, system engineering, nutrition, automation, genomics, proteomics …).